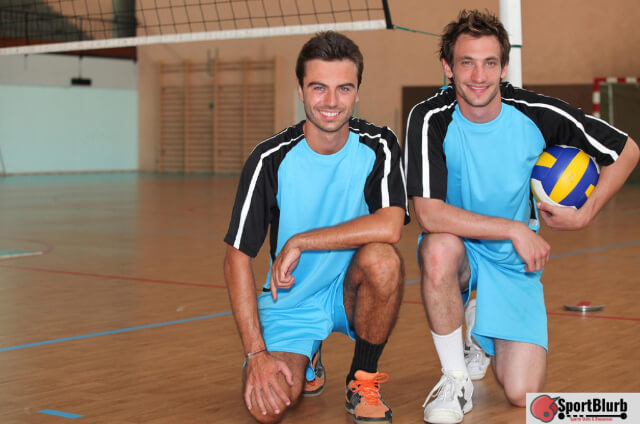 In the game of volleyball, liberos are generally the shortest players in any volleyball team, mainly because their heights are not needed. The average height of the Libero in men’s professional volleyball is 182.23cm or 5 Foot 11.7 Inches.

Outside Hitter In Men’s Volleyball

This is a very diverse and fluid position in volleyball which comes in all shapes and sizes. You are expected to be a reliable hitter as well as a good defender in you won’t to play in this position.

The table below contains relevant questions and answers on short volleyball players.

Who Is The Shortest Player?

Farhad Zarif! Just like we mentioned above, he’s the shortest player, measuring only 165cm.

What Is A Good Height For A Volleyball Player?

Why Is There A Short Player In Volleyball?

Volleyball is a tall person sport that rewards height. Short volleyball players will never be at their height level when playing near the net as their taller counterparts. Unless a player is tall enough, the angle just don’t work up there for short players who couldn’t get their hand above the net. The libero’s position gives a chance to short players to succeed.

Can I Play Volleyball If I’m Short?

As long as you have some basic volleyball skills to hit, pass, serve, and block the ball, you’ll do just fine. So, If you’re around 5 feet five inches, you’re still good to go. Most of the best player around are not really tall, so you don’t need to be discouraged if you’re not too tall.

Why Are Liberos Short?

Can I Be A Setter If I’m Short?

Being a good setter requires you to have good decision making skills and excellent ball control. If you’re really passionate about becoming a good volleyball player, your height should never discourage you, even if most people lay more emphasis on height in volleyball.

Can A Libero Spike?

Any player can be replaced by the libero in a back row position in both male and female category.  However, the liberos are not allowed to block or attempt to block but they may serve. If the ball is entirely higher than the top of the net at the moment of contact, the libero will not be permitted to spike the ball.

Can You Have 2 Liberos In Volleyball?

Coaches are given the opportunity to choose one, two, or no liberos per set in USAV volleyball for 2016. However, if the coach decides to choose two liberos, then they must be the two liberos for the entire game.

The shortest player to every play the game of volleyball was Farhad Zarif, who measures just 165cm or maybe five feet five inches. The shortest player in the women category was Jorella Marie de Jesus, a worldwide professional from the Philippines, which measures merely 152cm or maybe five feet. We’ve come to the end of this informative article. We hope you were able to find resources in your quest to know the short volleyball players. Please do not hesitate to contact us for questions or comments. Thanks!